Updated: I fixed the map so that you can click on it and get a bigger version.
One of the saints celebrated today is St. Philothei of Athens. As a young teenager, she was forced against her will into a loveless and abusive marriage of political and economic convenience. After her husband and then her parents died, she was visited by the Apostle Andrew. Interpreting this vision as an order from God to build a convent dedicated to St. Peter's brother, she used her inheritance to make the vision a reality. She became a nun at the convent, though she was known to occasionally live as a hermit in a nearby cave. She became well known for her mercy and sympathy.
Her end came when, under the Ottomans, some Turkish rulers of Greece decided that the nuns at St. Philothei's convent were to become members of their harem. They refused and were martyred. Her relics, save for her missing skull, are still in Athens today.

I realize that the abandoned monastery as an entrance to a megadungeon has become a bit of a cliched trope of the OSR, but the life of St. Philothei just screams "Back Story!" for exactly this convention. Thus, I have been inspired to create The Convent of St. Andreas.

Built by the wealthy widow of an abusive marriage, St. Domnitza, the convent now stands abandoned at the edge of the wilderness where once civilization thrived. This location was chosen because of a vision she received from St. Andreas, for whom the convent is named. It is built in the form of the Istenite Wolf Hook, which has subsequently become an architectural norm for Istenite monasteries and convents. It sits atop the eastern side of a shallow mesa. The western edge is dotted with caves once used by nuns who chose to be hermits. The top of the mesa is covered in fertile soil that once was a lush garden tended by the nuns.

The monastery was abandoned after civilization lost its hold of the immediate territory in a war against Ulcib Bonebreaker, who briefly united several orc tribes under his banner (or, whatever is the most logical monster group that would have defeated civilization in the area the convent is placed). Most of the nuns, including St. Domnitza, were burned to death when the orc's attempts to capture them for breeding purposes failed.

For many years, the orcs used the monastery as a fortress and expanded both the catacombs and wine cellar below, until they dug too far and encountered something that brought an end to Ulcib Bonebreaker's rule.

Since then, adventurers have been exploring the area and have come back with treasure both monetary and religious. One such find were the relics of St. Domnitza herself; however, her skull is still missing.

There are two ways into the convent. There is the main entrance and a secret entrance into the wine cellar that was designed to be a means of escape in times of trouble. Unfortunately for the nuns, the orcs had discovered this secondary entrance during their attack. There are also several ways into the dungeon beneath:

Rumor Table (which may or may not be true) 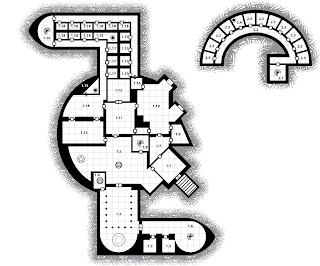