As I did for my similar meditation on the Fiend Folio, I wanted to find a map of a dungeon to stock using the Wandering Monster Tables I produced using monsters from the MMII. As before, I went to the maps of Dyson Logos to see if anything there inspired. I did not find any "dungeon" that satisfied, mainly because the idea of a dungeon, in a traditional D&D sense, isn't really something that an MMII-based Basic D&D automatically assumes. Most of the monsters therein are outdoor creatures that wouldn't be found crawling through the corridors of a long-lost dwarven mine.

I did, however, find these two maps here and here. I fiddled with them in order to make an odd looking two story manor that one might find out in the wilderness of an MMII-based Basic D&D world: 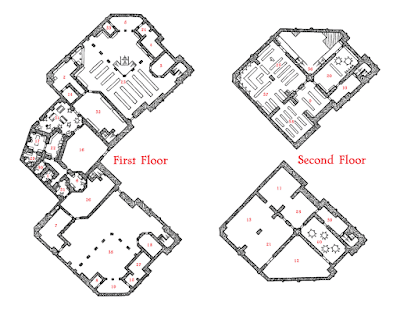 As before, I used the table provided by Holmes that randomly determines which WMT (1st through 3rd) to use so that I could take advantage of all three WMTs I produced with MMII monsters. Here are the results with some initial thoughts in parenthesis:

Rooms 1-13 are Empty
Rooms 14-15 have Unguarded Treasure
Rooms 16-21 have Specials
Rooms 22-26 have Traps
Rooms 27-28 have Treasure guarded by Traps
Rooms with Monsters sans Treasure:
29. Gripple (a prisoner?)
30. Pedipalp (charmed as some kind of guard?)
31. Vulchling
32. Footpad
33. Seer
Rooms with Monsters guarding Treasure:
34. Animal Skeleton (a servant of the Seer?)
35. Footpad
36. Constrictor Snake
37. Veteran
38. Vulchling
39. Scorpion (a kind of watchdog for the Footpad in Room 35?)
40. Hargin Elemental (summoned to guard the Footpad/Vulchling gang's hoard?)

This has shaped up to be a hideout of a gang of Thieves that employs Vulchlings, human Fighters and a Magic-user. The leader seems to have figured out a way to train giant insects and they have a beef with the local fey.

And for those of you who want a version of the map I made for this post sans numbers here it is: 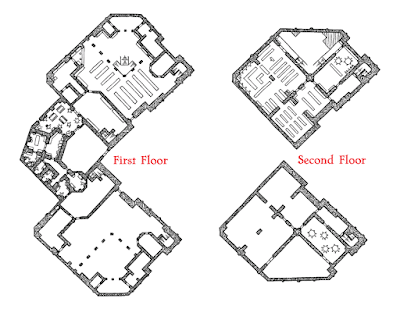