Today is the Synaxis of the Twelve Holy Apostles: Peter, Andrew, James & John the sons of Zebedee, Phillip, Bartholomew, Thomas, Matthew, James the son of Alphaeus, Jude the brother of James, Simon & Matthias. As I have mentioned before, the word Synaxis means gathering. It refers to the gathering of the saints associated with a feast, and is celebrated the day after that feast. Yesterday was the Feast of Sts. Peter and Paul — the Paramount of the Apostles. Therefore, today the Orthodox Church gathers together the Twelve. 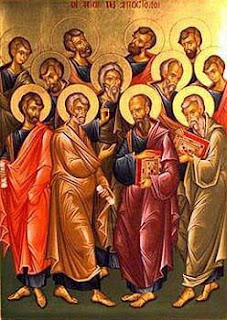 The word Apostle means The One Who is Sent. In context of Christianity, of course, one is sent to preach the Gospel; however, in context of RPGs of every genre, the PCs can be sent by a Patron to complete a specific task. These tasks, of course, can have world-affecting consequences.

The Twelve, as is well known, travelled all across the known world (and beyond) founding local churches as they went. Since ancient times, local churches would trace the linage of their bishops to the Apostle who initially founded their Church. For example, Rome goes back to Peter, Constantinople goes back to Andrew and the Malayalam-speaking Christians of south west India go back to Thomas.

In context of an RPG campaign, such a wide-spread and long-lasting effects require a long-running campaign world that persists enough for players to have multiple characters in multiple games/campaigns. To anyone who regularly reads my blog it will be no surprise that, like most gamers, I am very much susceptible to Gamer ADD. My imagination flies off in a myriad of directions at the slightest provocation. If, however, I allow Gamer ADD to preoccupy my actual gaming, I would never experience the joy of past character action affecting current PC play.

If there is one old-school product that caught my attention more than any other, it would be the original Rogues Gallery. Therein, I found all of these fascinating characters that obviously emerged from actual play. Now, I do have my own collection of favorite characters that I have played over the years. Unfortunately, they all exist in separate worlds, genres and rules. Indeed, my youth was dominated by Gamer ADD impulses and I never really got to experience the reality depicted in Rogues Gallery. That is, until now. 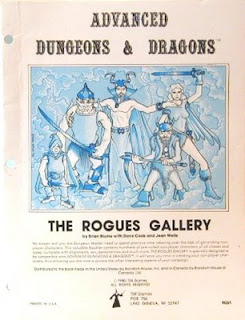 Through forces that I don’t completely understand, a great deal of patience and focus on my part and a willingness to forgo all of the various opportunities to pursue supposedly greener pastures, my Lost Colonies campaign persists despite sporadic play, a changing cast of players and my own inadequacies as a Referee. As a result, there are now a Rogues Gallery of characters that populate a single world and that affect our current play.

Even in death, the original group of PCs looms large and the menagerie of characters that they left in their wake makes my Lost Colonies campaign live in a way that I could never have accomplished on my own. The fun part is that it is this very Rogues Gallery that keeps me coming back over and over again. I look forward to the way new characters will not only interact with what has come before, but what they will leave in their wake. I only have a finite amount of time to dedicate to actual play, and continuing this campaign has a far greater pull than any new fancy toy that might briefly take hold of my imagination.

In other words, continued play is something I have always aspired to and have oft wondered if the rewards were as great as I imagined. I can now attest that yes, indeed they are.