Children of the Watchers

Recently, while doing some research, I ran across a reference to the "Children of the Watchers." It is a phrase that pops up in some of the Apocrypha found in the Dead Sea Scrolls. The origin of the phrase lies in the word "Nephilim" in Genesis and and the word "Watcher" in Daniel.

The Nephilim were on the earth in those days — and also afterward — when the sons of God went in to the daughters of humans, who bore children to them. These were the heroes that were of old, warriors of renown. — Genesis 6:4

This is a difficult passage to translate and to understand. Are the Nephilim the children of the sons of God — angels — and women, or are they something else altogether? In context, the author is giving a litany of examples of how sinful creation has become prior to God's decision to tell Noah that He's going to flood the earth. To boot, Nephilim is not easily translated (as it is simply transliterated in the English); however, we do get a glimpse of what it might mean from the Jews of Alexandria some 300 years before Christ. The translation of the OT into Greek that they produced (called the Septuagint or LXX) translates the word Nephilim as "giants." We see a reference to giants again in the Wisdom of Solomon:

For even in the beginning, when arrogant giants were perishing, the hope of the world took refuge on a raft, and guided by your hand left to the world the seed of a new generation. — Wisdom of Solomon 14:6

Thus, this author has interpreted Genesis 6:4 to indicate that the Nephilim were monsters. In Baruch, we see giants again:

O Israel, how great is the house of God, how vast the territory that he possesses! It is great and has no bounds; it is high and immeasurable. The giants were born there, who were famous of old, great in stature, expert in war. — Baruch 3:24-26

This time the author understands giants to be the heroes of old, born of the sons of God and women.

Take all three together, and the Nephilim of Genesis 6:4 are the monstrous offspring of some angels and women.

The term "Watcher" is used in the OT exclusively in Daniel:

The sentence is rendered by decree of the watchers, the decision is given by order of the holy ones, in order that all who live may know that the Most High is sovereign over the kingdom of mortals; he gives it to whom he will and sets over it the lowliest of human beings.' — Daniel 4:17

This comes from a dream of Nebuchadnezzer that Daniel is asked to interpret. The "watchers" are an order of angels. From this particular passage, it seems that their task was to judge sin. The term "watcher" also is found in such Apocryphal works as the Book of Jubilees and the Book of Enoch. There seems to be an understanding that watchers are fallen angels. With the use of the term "Children of the Watchers" the Nephilim of Genesis 6:4 are interpreted to be the offspring of an order of fallen angels called the Watchers when they "went in to the daughters of humans."

This got my creative juices flowing, and evokes in me the image of some kind of secret society that acts as a group of depraved vigilantes meeting out their twisted version of justice through assassination. They are all descendants of Nephilim and get their name from their demonic progenitors. Since the Children of the Watchers are monsters, they can be any intelligent creature. Their ancestry and their vision of justice is what unites them. In addition to whatever powers and abilities they ordinarily have, Children of the Watchers gain all of the following abilities:

1) They surprise on a 1-4 and can only be surprised on a 1.
2) Any successful attack either from surprise or from the rear does an additional 1d6 damage for every 2HD the creature has.
3) They leave no tracks.

Regardless of their form, Children of the Watchers are all marked with the seal of their order: 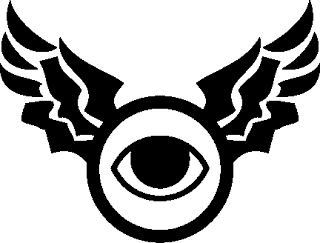