For those of you that read my last Lost Colonies Session report, you know that I was very much inspired by the Moon Things of Realms of Crawling Chaos. I do, however, have to admit, I fiddled with the statistics and made my own version (something that I do on a regular basis, by the way, to keep some of my players on their toes): 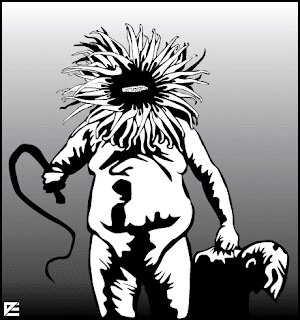 Enslavers are a cephalopod-like semi-humanoid race originally engineered by Brain Lashers for the purpose of hunting down and capturing food. Although still found in service to their designers, they have been found to be in service to other creatures and even as independent slavers and pirates.

Their spineless bodies not only allow them to fit through tiny spaces and elongate their limbs into whip-like weapons, but it allows them to "roll with the punch." As a result, they only take half-damage from all normal attacks. Cold and fire attacks do normal damage and they take double damage from electrical attacks.

Although capable of using normal weapons when attacking, Enslavers prefer to attack first by elongating their limbs in whip-like fashion. A successful attack does no damage, but requires the target to save vs. spells or drop their weapon. Regardless of the success or failure of the save, the Enslaver gets a +2 on their next attack roll. This second attack normally utilizes the mass of squirming tentacles Enslavers have in place of a face. A successful attack has a similar effect as a Sleep spell (no save). This attack is not magical in nature and therefore can affect elves.